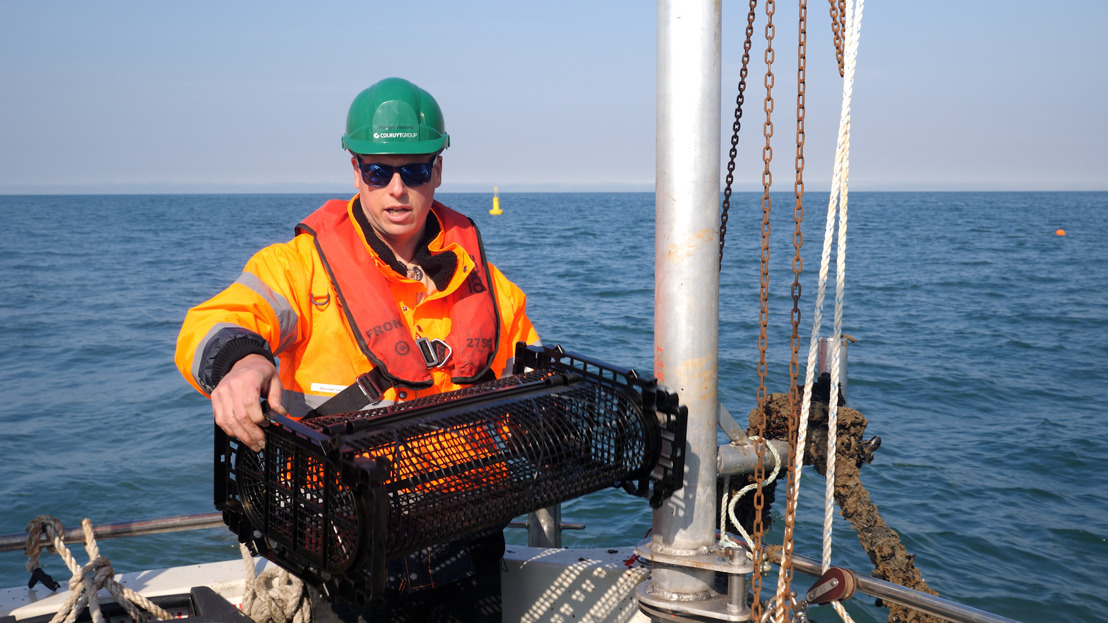 A shared area of a sea farm growing mussels, oysters and seaweed, and passive fishing using innovative baiting techniques has been extensively tested off our coast over the past three years. The fact that it works, is good news because, unlike traditional (active) beam trawling, both these activities are allowed in wind farm zones. Light, sound and smell appear to be successful techniques to catch more squid (cuttlefish), shrimp and fish on the bottom of a multi-species sea farm. Data scientists have also developed tools that allow sea farm operators to better plan sea trips. The results of VLAIO project SYMAPA were presented to press and stakeholders on Thursday in Ostend by project partners Colruyt Group, Brevisco, AtSeaNova, Flemish Fish Auction, Institute for Agricultural, Fisheries and Food Research (ILVO) and The Royal Belgian Institute of Natural Sciences (KBIN).

Minister for the North Sea Vincent Van Quickenborne attended the event: “We are going to develop the Belgian part of the North Sea as our country's leading energy power station and as an engine of innovation and self-sufficiency. That is why, in addition to wind farms and floating solar panels, we also want to cultivate seaweed in the North Sea to make biofuel. To this end, we have allocated a €250,000 research budget. Besides energy, the wind farms can also be used to produce food. When you know that Europe imports 70 % of all sea food, we can rightfully say that there is still a lot of potential in our country for mariculture and passive fishing. In this way proteins extracted from seaweed or shellfish, no longer need to be produced through livestock or fishing. The results of the SYMAPA project show that important steps have been taken to make a combination of not one, but two or even three activities in the same North Sea zone possible in a technical and biological sense, while it is also economically profitable.”

In passive 'pot fishing', fish and other marine animals are lured to and caught in pots attached to buoys at the bottom of the sea. This form of selective fishing results in little bycatch, little to no bottom impact and little fuel consumption. The pots are emptied every day, which improves the quality of the catch. ​

Fishing capacity can also be optimised by using light, sound and potentially also smell. This is shown by ILVO trials in the Westdiep zone off the coast of Nieuwpoort:

Mattias Van Opstal and Jasper Van Vlasselaer (ILVO): “The study produced a toolkit of innovative techniques that fishermen can use to increase catch in pots. Depending on the area in the sea and the species present there, one or the other baiting technique will be more interesting.” ​ ​

Passive fishing scores well in terms of quality and taste

The North Sea is a well-monitored ecosystem. KBIN but also ILVO and several European partners collect data to monitor the health of fish stocks and of the wider marine ecosystem. KBIN also designed useful tools to plan trips out to sea. There was already a platform for five-day marine forecasts on tides, wind speeds, wave height, etc. Thanks to SYMAPA and the EU-H2020 FORCOAST project, there is now also a modelling tool to predict the best period for installing spat collectors. With those devices, growers collect stray seeds of mussels and oysters for subsequent breeding. Placing them too early can cause annoying fouling; placing them too late can ruin the seed harvest.

Léo Barbut and Geneviève Lacroix (KBIN): “Thanks to these modelling tools, we are another step closer to smart aquafarming. Operators of sea farms can use data to plan when to go out to sea for maintenance of their facilities, for seed collection and ultimately for harvesting.”

Edulis, a previous project, already successfully cultivated mussels in between wind farms 30 to 50 km off the Belgian coast. SYMAPA coordinator Brevisco also demonstrated in the privately-funded Nearshore Mussel project that large-scale mussel farming in the Belgian North Sea is technically and economically feasible. The Belgian ‘blue mussel’ is larger and meatier (40-45% meat values) than the Zeeland mussel (30-35% meat values). It also grows faster and tastes good. In SYMAPA, the cultivation technique was optimised to the nice result of 16 kg of mussels per metre. Thanks to seemingly minor adjustments to the installations, there is now also no damage during storms. The installations have been made stable and 'North Sea-proof'.

Quality oysters from our North Sea

During the past Value@Sea project it was demonstrated that the endangered flat oyster can be grown in the North Sea. In SYMAPA, cultivation techniques were further fine-tuned in the Westdiep zone, with varying degrees of success. Quality flat oyster farming near the coast is possible but the rapid growth of unwanted organisms (fouling) on the baskets is a technical obstacle that needs to be overcome for commercially viable farming. It hinders the flow of fresh seawater, periodically depriving the oysters of enough nutrients to grow.

Wannes Voorend (Colruyt Group): “Growing multiple species in a sea farm would allow us to offer a wider pallet of seafood, in addition, combining activities also has some operational advantages. The applications in Sea Farm Westdiep are already promising, but we are doing this in a step-by-step approach towards commercial farming.”

For seaweed, the natural conditions in the North Sea are an ongoing technical challenge. In SYMAPA, both horizontal and vertical structures were tested by partner AtSeaNova. Horizontal structures are fine when the waves are calm, but in the North Sea the pulling force is too great. Therefore, they switched to vertical installations with loose suspension lines. These structures are now being further tested in the ongoing EU-H2020 project UNITED.

The Belgian part of the North Sea is only 3,500 km² but interesting for a variety of activities. Think mariculture, fishing and energy production but also shipping, sand extraction, recreation, nature and coastal protection. Planning these different activities in the Marine Spatial Plan is a difficult but important puzzle. In the current plan (2020-2026), marine aquaculture is only allowed in the Westdiep zone and the wind farms. Passive fishing is also allowed in both, unlike classic beam trawling which is not allowed around the windmills.

Bert Groenendaal (Brevisco), SYMAPA coordinator: “The fact that synergies between mariculture and passive fishing are possible is a major boost from this project. There is now a toolkit of innovative fishing techniques, mussel farming has been optimised and there are forecasting models that make the combination of marine activities more logistically and economically feasible as well.”